Fie Schouten, born in Amsterdam and still living there, performs in various formations at many different podia and festivals. She has performed all over the world and is playing on all the clarinets with a warm preference for the low ones.

Many new pieces are written for and premiered by her groups by composers with very diverse styles and of very different backgrounds and nationalities. Free improvisation appears in many of the pieces. Fie Schouten initiated and leads together with Tobias Klein the Basklarinet Festijn, with four editions: 2014, 2016, 2018, 2020.

Fie Schouten is initiatior and curator (together with composer Aspasia Nasopoulou) of the series for contemporary chambermusic Nieuwe Noten Amsterdam, at Plein Theater nieuwenoten-amsterdam.nl 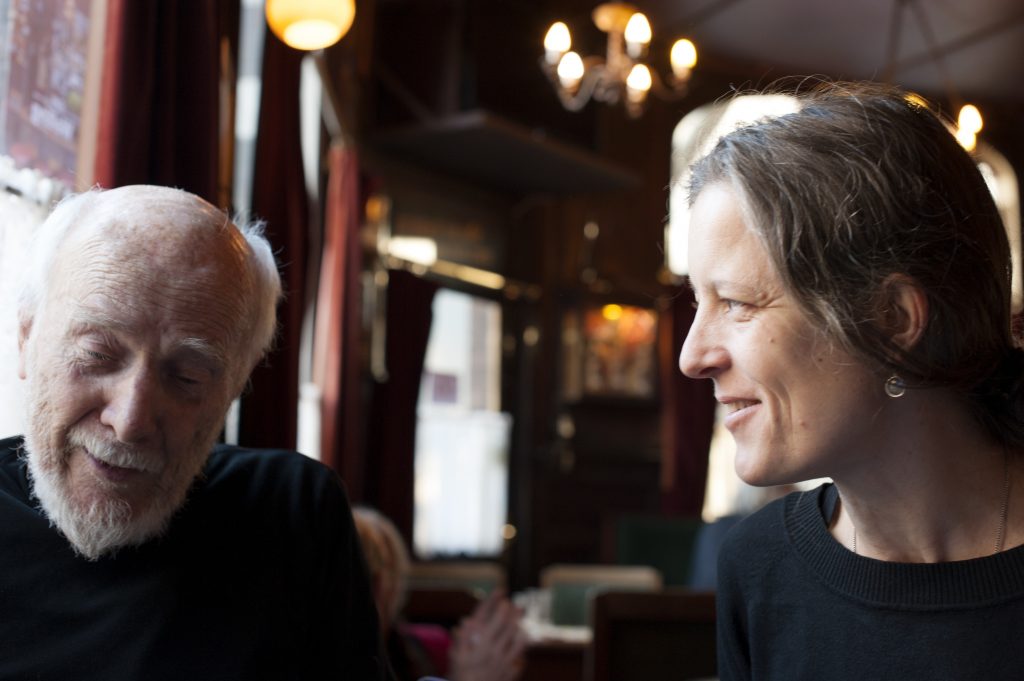 Loevendie: “Fie Schouten is one of my most appreciated musicians” (pict E.Melchior)

Fie Schouten workes together with composers since her studies. She learned to enjoy this collaboration from former teacher Harry Sparnaay, now she teaches the younger generation and is still working with composers of all over the world, young and old(er). About 100 compositions were written for Schouten and her ensembles and she performed them all.

Schouten is professor bass clarinet at the Prince Claus Conservatory Groningen. She was guest-professor bass clarinet at Codarts Rotterdam and was visiting professor at the University of Music and Performing Arts Vienna.
She teaches the next to the bass clarinet, the bassethorn, contrabass clarinet, contemporary techniques, methodology, she conducts the studentensemble of the conservatoire performing contempoary music and regularly invites composers to work with the studentperformers.
Since 2017 she is coordinating the elective Sustainable Performance, where the physical and mental health is the main topic and led by different specialists.
Also Schouten is teaching privately, mostly students and adults.
Since 2015 she gives lectures with live-performances on contemporary music at the Dutch institution HOVO-VU Amsterdam and on invitation.
She was jurymember in 2018 during Gaudeamus Muziekweek for the Tera de Marez Oyens (composition) Price.

In 2019 Fie Schouten received 1st Nieuw Geneco (composers association) Fair Practice Compositioncommission Award for her impact on the musicscene in the Netherlands, an inspiration for many and with attention for Fair Practice.
She produced seven CD’s. The latest one is called Monologues 2020 [2021] a solo CD; Nature (2020) contains chambermusic for (bass) clarinet. Two CD’s are released at ATTACCA, Chambery (2018) with chambermusic for bass clarinet and her solo CD Ladder of Escape 11.
Her other cd’s ‘Of Villages and Spaces’ (KAIDA 2005), ‘Amsterdam, de wereld’ (To be Sung 2007) and ‘Spielzeug’ (bklar,acc,trb 2009) came out at Karnatic Lab Records. Schouten’s duo Kaida received the Tera de Marez Oyens Prijs in 2002 (NL). It won prize for best impro at the International Gaudeamus Competition (NL’03), best windensemble at 13th International Chambermusic Competition Illzach (F’03).

In 2008 Fie played her first piece by Stockhausen, now she is a specialist.
Fie played the solistic part as one of the ‘Clownesque Swallows’ in MICHAELS REISE um die Erde many times – mostly with the German Ensemble MusikFabrik and in regie of La Fura dels Baus, but also with the Dutch ASKO-Schonberg ensemble and the French Ensemble Le Balcon.She performed LICHT-BILDER (SONNTAG aus LICHT) in the production of musikFabrik/Oper Köln in 2011; MICHAELION (MITTWOCH aus LICHT) at the London 2012 Festival with the Birmingham Opera Company; HARMONONIEN (KLANG) oa at the MusikTriennale Köln; BASSETSU TRIO (MITTWOCH aus LICHT) and ROTARY quintet at the Festival d’Automne Paris 2013/2014; BASSETSU solo and TIERKREIS.

She studied at the Conservatory of Amsterdam, where she received her Bachelor Diplomas in clarinet and bassclarinet and a Masters Degree in bassclarinet with Harry Sparnaay, Tom Sieuwerts, and Herman Braune. She has participated in masterclasses in Austria (Impuls), Germany (Darmstadt) and France (Pablo Casals Festival), where she had lessons with clarinettists Ernesto Molinari, Michel Lethiec.

Fie was during 3 years (2016-2019) Advisor at the Amsterdam Art Council, AFK. She is teaching Professional Writing at the Hogeschool van Amsterdam, faculty HRM since 2018.

Fie is playing on Schwenk & Seggelke clarinets, Buffet bass clarinet and bassethorn and Leblanc contrabass clarinet.
Her mouthpieces are made by Edward Pillinger, she uses Florian Popa and Vandoren ligatures and Vandoren en Schwenk&Seggelke reeds.